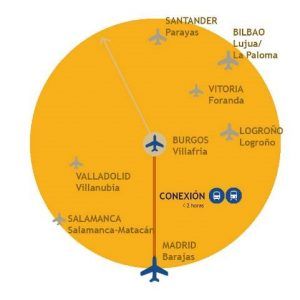 Burgos has a privileged geographical location. It is the main road hub between the north and south of Spain, as well as between Portugal and the rest of Europe, which makes it a connection point for the main Spanish and European economic areas. The city can be accessed via airport, rail, and bus.

• All the Metropolitan Transport services in Burgos have the Bus Station on Miranda Street as their main line. Some of these lines share stops with the Urban Bus Service of the city of Burgos, and there is intermodality

Located in the North of the Iberian Peninsula, it is integrated into the community of Castilla y León. It has a population of 176,000 inhabitants. The city has a developed industry, around the automobile and food sectors. It has a diverse educational offer led by the University of Burgos.

It has an extensive peripheral green ring, two linear parks around the two main rivers that cross it and a large monumental complex, among which the Cathedral of Santa María stands out, an exponent of Gothic architecture declared a World Heritage Site by UNESCO.In addition, the city is crossed by the Camino de Santiago, another World Heritage Site, and is 16 km from the Atapuerca site, also a World Heritage Site. Through the Museum of Human Evolution, the most important fossils found at the site are exhibited.

The Province of Burgos has 2,500 documented cavities distributed in different karstic zones. These cavities stand out for their biological-archaeological (Ojo Guareña), archaeological-paleontological (Cueva Mayor–El Silo in Atapuerca) hydrological interest (spring of the Pozo Azul with 13,755 m.), geological interest (Fuente Molinos, spring developed in calcareous conglomerates with 4,086 m.- 5th largest cave in the world).

No comments to show.